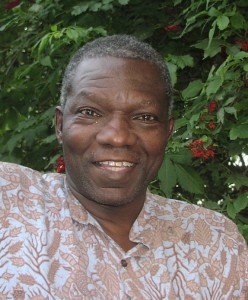 Pakisa was born in Kajiji, Democratic Republic of Congo near the border of Angola. His father, a pastor, was Angolan by birth and his mother, Mama Makeka, was Angolan by descent. Pakisa attended primary school in Kajiji, a mission station, where he was taught by Mennonite Brethren missionaries who also ran the hospital, clinic, and church. He completed his secondary education in Kikwit where there was a Mennonite boarding school, and then, with the help of missionaries and others was able to study at Pacific College in Fresno, California in preparation for medical school. In the summer of 1976 Pakisa and some friends were involved in a car crash on their way to Canada to attend a classmate’s wedding. This event changed Pakisa’s life. Rather than attending medical school in France that fall then returning to Congo to serve his countrymen as a surgeon, he spent months in the hospital recovering from a broken neck and relearning all those things many of us take for granted.

Since medical school was no longer an option, Pakisa chose another route: public health. In the mid- 1970’s, he attended Loma Linda University where he received his Master’s in Public Health then, in the late 1980’s, he returned to earn his Doctorate in Public Health from the same institution. Since that time, he has worked with Mennonite Brethren Missions and Services, as consultant for Mennonite Central Committee, MEMISA, and Mennonite World Conference based both in Congo and in Fresno, California. Working within these organizations has given him the opportunity to travel around the world and meet people from all cultural backgrounds and walks of life. He has seen great joy and great grief. He has listened compassionately to other’s stories and taken time to share his own. Since the accident, Pakisa no longer has the ability to run, like the record-making soccer player he once was, but walks slowly, first with a cane and now with a walker. Ironically, this slow walk creates in others the desire to walk slowly alongside him and, in this way, take time to share their stories.

Although leading a seemingly charmed public life, Pakisa’s private life seems anything but charmed. He has lost seven of his nine siblings, both parents, and many of his friends and relatives, some to HIV/AIDS, some to violence, and some because basic health care was not available. As a result of the accident, his shoulder continues to give him great pain and his capacity to walk and stand is limited. His life and loyalties are often divided between two very different countries and cultures. Mama Makeka House of Hope, founded in 2003 in honor of his mother, along with his wife, Linda, his three children, and friends and relatives around the world provide him with stability and vision, not only for a better Congo but for a compassionate and caring global community in which gifts of all kinds are shared, people of all cultures and beliefs join together in love, people become the attraction, not the distraction, and there is always time for one more.